Dhammayazika Pagoda, also known as Dhamma-ya-ka Zedi or Dhamma-Yazika Pagoda, is one of the most impressive temples on the Bagan Plain in Myanmar.

Dhammayazika Pagoda was constructed in 1196 during the reign of King Narapatisithu. King Narapatisithu, also known as King Sithu II, is considered by many to be the last great King of the Pagan Empire and he was also responsible for building a number of other impressive temple in Bagan including the Gawdawpalin and Sulamani temples. Dhammayazika Pagoda is striking and unusual temple that was extensively restored in the 1990s. The temple is constructed out of bricks and features a large central dome which was painted gold during the recent restoration work. The base of the temple has five sides, which a smaller stupa on each side. These five smaller structures house statues of the four previous Buddha and the next Buddha who has been prophecised to follow the last Buddha, the Gautama Buddha.

The Dhammayazika Pagoda features 371 tiles each referring to one of the Jataka tales. The Jataka tales are a collection of stories from India about the previous incarnations of the Gautama Buddha, and the niches in the wall suggest that there were originally 601 of these tiles, which means that 230 of the tiles were either stolen or fell over the temple and broke. The other notable feature of this temple it is that is surrounded by a very healthy looking garden which is unusual compared to the rest of the largely dry and dusty Bagan Plain. 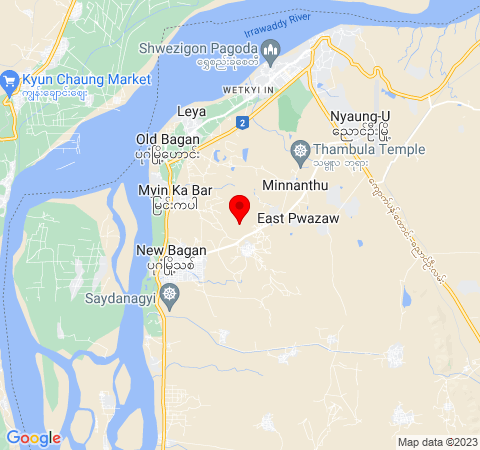 Ein Daw Yar Pagoda is located in Bagan. Follow the links below for information about travel to Bagan: