Ein Daw Yar Pagoda is a spectacular golden stupa located in the centre of Mandalay city in Northern Myanmar.

Ein Daw Yar Pagoda means the ‘Royal House’ Pagoda. The reason for the name is that the pagoda was built in 1847 by King Pagan Min on site of his former residence before he ascended to the throne in 1846. The stupa tower is 35 metres tall and covered in gold leaf which shrines brightly in the day light and is illuminated by lights on night. Inside the pagoda is housed a statue of the Lord Buddha brought from India in 1839. Located around the stupa is an active Buddhust monastery.

Ein Daw Yar Pagoda was a rallying point for anti-colonial rule during the time when Myanmar, then known as Burma, was a British colony. In October 1919 a group of European entered the pagoda in their shoes, and some of the visitors were women, both of which offended local customs and was seen as disrespectful to the Lord Buddha. The visitors were forcibly removed from the pagoda by the monks, 4 of whom were sentenced to imprisonment by a British colonial court. The incident and subsequent imprisonment of the monks was one of the major catalysts for a religious back lash against colonial rule. 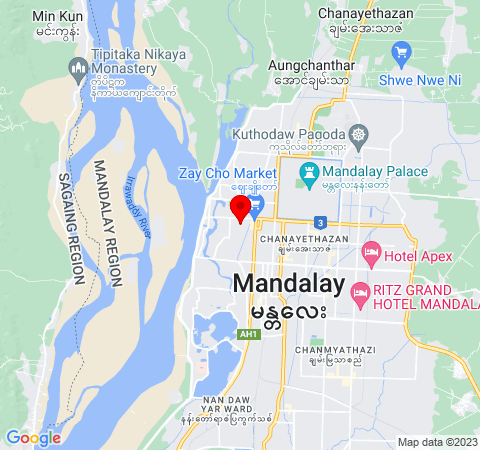 Ein Daw Yar Pagoda is located in Mandalay. Follow the links below for information about travel to Mandalay: