Kuthodaw Pagoda is a unique and fascinating Buddhist religious site constructed at the bottom of Mandalay Hill which was looted by the British Army at the end of the 19th Century and thereafter restored by donations from all over Myanmar.

Construction of Kuthodaw Pagoda began in 1860 as a royal project which coincided with the establishment of Mandalay as the new capital. Construction went on for 8 years. The gilded stupa at the centre, which is 57 metres high, took 2 years to complete. What took a long time was the completion of the 729 scripture halls located inside the temple complex. Each of these smaller structures contains a marble tablet inscribed on both sides with parts of the Tripitaka, which are the Buddhist holy scriptures. The temple is sometimes referred to as the ‘World’s Largest Book’ in reference to these 729 tablets, each of which is 153 cm tall and 107 cm wide.

In its original state Kuthodaw Pagoda was rich in gold and jewels The inscriptions on the tablets where painted with gold leaf and each of scripture halls was topped by a hti, which is a traditional umbrella shaped ornament made of gold and encrusted with precious stones. The British Army took control of Mandalay in 1885 and troops were billeted in the temples and palaces in the city, including Kuthodaw Pagoda, When they finally left Kuthodaw Pagoda in 1890 all the gold and jewels had been stripped from the temple along with carved wooden panels and many statues. Basically anything of value that could be easily carried out left at the same time as the troops. The temple ended up being restored by donations from Burmese people, including the Royal Family, but using cheaper materials. The inscriptions on the stone tablets are now lined with black ink. 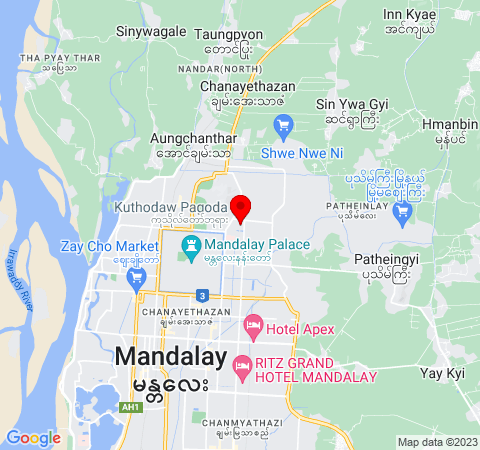 Kuthodaw Pagoda is located in Mandalay. Follow the links below for information about travel to Mandalay: