Mount Popa is 1,518 metre tall extinct volcano 20 km to the south east of Bagan. There are several remarkable things about Mount Popa:

Mount Popa is wide mountain with a prominent sunken caldera 1.6 km wide and 850 metres deep. This impressive extinct volcano is a prominent feature of an otherwise flat landscape. The natural springs that have formed on the mountain make the area fertile and good for farming. Many people live on the slopes on the mountain farming a wide variety of crops which can’t be easily grown in other drier parts of the Central plains of Myanmar. It is therefore hardly surprising that the mountain is believed by many Burmese people to have a spiritual significance. The area appears quite literally to be blessed and it attracts pilgrims from all other the country, particularly during December and the New Year festival in April. Fewer foreign visitors attempt the walk up Mount Popa itself, which takes about 4 hours to climb from where the road ends.

The more popular attraction for visitors to the Mount Popa is the walk up to the monastery on top of Taung Kalat. It is free to visit but you will be asked for donations to the point where you may convinced that there is an official entrance fee. To reach the top of Taung Kalat you need to walk up 777 steps in your bare feet. The staircase is believed to be a sacred area as well as the actual monastery on top of the hill. The staircase up the hill is covered with a metal roof for shade. The major annoyance on the way up, however, is the monkey droppings left by thousands of macaque monkeys who live on Taung Kalat. There is an army of people who make a living sweeping the stairs in return for donations, but still not enough to keep the area clear of monkey dung. The views from the top of Tuang Kalat are fantastic. For many Burmese people the shrines on Taung Kalat are very important. The hill is closely associated with the mystical Nat, some of whom are believed to reside on Mount Popa. For visitors who do not share these beliefs, or understand their significance, the monastery at the top of the hill will not be as impressive. 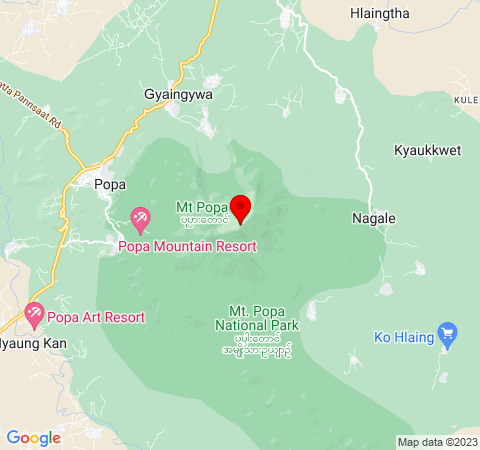 Mount Popa is located near Kyaukpadaung. Follow the links below for information about travel to Kyaukpadaung: