The Mya Tha Lyaung Reclining Buddha is fairly new, having been completed in 2001 funded largely by donations from local residents. There a few special things about the Mya Tha Lyaung Reclining Buddha that make it worth visiting. Firstly, the size of the statue. Its 82 metres long making in the longest Buddha statue in Myanmar and one of the longest in the world. Secondly, the high artistic quality of the statue. The features of the statue are in good proportion and the detailing, particularly on the feet, has been very competently executed. Thirdly, the statue has an excellent location. There are no buildings surrounding the statue, and no protective cover obscuring the view, and it faces a picturesque fishing lake. The reclining pose with the figure’s head resting on his hand is believed to be a reference to a period when the Lord Buddha suffered a bout of food poisoning and this pose features heavily in Buddhist art.

Once you have spent a while marvelling at the Mya Tha Lyaung Reclining Buddha we suggest that you then walk 500 metres to the north and visit the Shwethalyaung Buddha. The Shwethalyaung Buddha is 55 metres long and 16 metres high. There is some disagreement about when the Shwethalyaung Buddha was constructed. Some people believe that the statue was completed in 994, which makes it over a 1,000 years old. The statue portrays the Lord Buddha near to death and about to enter Nirvana, which is the Buddhist name for heaven. The base of the statue features murals of the origin of the statue, which are interesting and tell a story of a King who realises he has been worshipping the wrong gods and erects a statue of the Lord Buddha to makes amends. 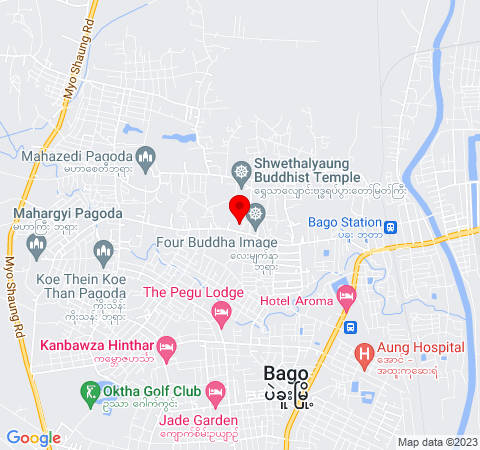 Mya Tha Lyaung Reclining Buddha is located near Bago. Follow the links below for information about travel to Bago: