Sagaing Hill is a cluster of small hills covered with temples located 20 km to the south west of Mandalay city centre on the banks of the Irrawaddy River.

Sagaing was the capital city of the Kingdom of Sagaing, which existed briefly from 1315 to 1364, and even more briefly the Royal Capital of Myanmar from 1760 to 1763. In modern times the town of Sagaing, with a population of around 70,000, has become an outer suburb of the ever growing city of Mandalay. Sagaing is a popular destination as a day trip for domestic tourists and what draws them to this corner of the metropolis is the hills covered with caves, shrines and Buddhist temples. The hills are literally packed with places of worship and home to an estimated 6,000 Buddhist monks and nuns. For an entry fee of $3 USD visitors can spend hours wandering around the hills. There are reputedly 536 chaung, or small places of worships, hidden in amongst the trees and caves on Sagaing Hill.

The main temple on Sagaing Hill is the Soon U Ponya Shin Pagoda, built in 1312. According to legend the temple was established by a monk called Ponya who became an important minister under the King. The story is that the King was presented with a gold box that he went onto use a place to keep betel nut. The King thereafter become ill. Ponya worked out that the reason the King had become ill was because the box in fact contained Buddha relics which the King had unknowingly desecrated by using the box to store betel nut. To save the King, Ponya took the box to Sagaing Hill where a temple was built to enshrine the Buddha relics. To reach Soon U Ponya Shin Pagoda you can climb a staircase that ascends 240 metres from the base of the hill, or alternatively take the easier option and drive up to the temple in car. 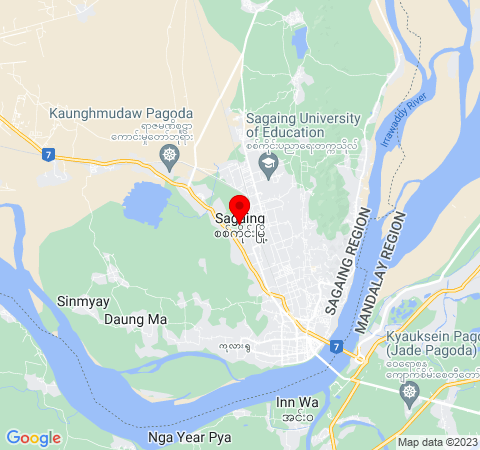 Sagaing Hill is located on the outskirts of Mandalay. Follow the links below for information about travel to Mandalay: